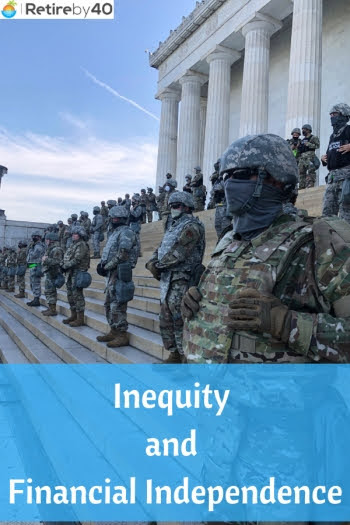 Normally, I try to avoid political and polarizing subjects like racism. This is a personal finance blog and those things are way off-topic. However, it has been a very difficult week in the U.S. Across the country, thousands of people are protesting against inequity and police brutality. I’m not out marching, so the least I can do is learn more about the issue and support the movement online. That’s why I want to talk about inequity and figure out what a regular person can do to help.

*To be clear, I support peaceful protest. Looting and rioting hurt small businesses and detracts from the main issue.

35 years ago, my parents immigrated to the US from Thailand with two suitcases and $500. In one generation, I moved up from working minimum wage jobs to a financially independent millionaire. It’s the American dream. This is why I believe anyone can achieve financial independence and retire early. If I can do it, anyone can. However, this narrative is not the whole story. Black and brown Americans can become financially independent, too, but their journey will be a lot more difficult. The system is set up to work against them.

I didn’t realize the playing field isn’t level until now. I’m not a racist so I didn’t want to talk about it, but now I understand that is not enough. Staying silent only feeds the inequity. That’s why I support the black lives matter movement and I’ll be publicly anti-racist from now on.

For me, financial independence was not that hard. Actually, it was pretty simple. I went to college and graduated with an engineering degree. After that, I worked hard to get raises and promotions. Then, I live a moderate lifestyle and invested a large portion of my income. Mrs. RB40 and I work together as a team to build our wealth every month. FIRE was only a matter of time once we got the system rolling. Anyone can do this. But is this really true?

A black man will have a lot harder time with this journey than I did. It’s harder for him to get into a good university. I had support from my family and graduated with no debt. Many black men don’t have that kind of support. It’s harder for him to find a good job and get promoted. Also, black people are paid less today. Then, there are very few mentors and role models that look like them in corporate America. Lastly, black men have to fear for their lives every time they interact with law enforcement. The journey is more difficult and less pleasant for many minorities.

I didn’t know about this kind of structural inequity until recently. Here is a short piece from NPR that helped me understand – Racism and Economics. Even the unemployment benefit was set up to exclude black workers when it first started.

Damn, am I one of those privileged people? As an Asian American guy, I never considered myself privileged. Over the years, I endured casual racist comments/taunts and annoying questions. However, that’s nothing compared to what POC have to deal with. I like the police because I don’t have to be afraid to get shot when I talk to them.

What can a regular guy do?

Inequity is a big problem in the US. What can one person do? I’m trying to learn more about the problem and figure out what I can do to help. That’s the first step anyone can take. There are writers and speakers who know a lot more about the issue I do. I’ll link to them below and help amplify their voices on social media. Let me know if you see anything relevant and I’ll add them here.

Support POC businesses and businesses that are trying to fight inequity

Okay, that’s all I got for today. I’m keeping it short so you can read/listen to the media above. Will you help fight inequity or do you think it’s not a problem?

The post Inequity and Financial Independence appeared first on Retire by 40.

Get Your Ex Back

Bricktowntom.com is a information aggregator and content curator site which gathers excerpts from various business sources, along with related stories and links them to mainstream media outlets for your convenience. This site may contain copyrighted material, videos or photos, the use of which has not always been specifically authorized by the copyright owner. We are making a small part of this material available for the purpose of providing information, and various views on subject reporting from different organizations. Bricktowntom.com does not claim ownership of any copyrighted content which remains the property of its respective owners.

As a top 100 online retailer with 200 million customers, ClickBank sells digital products worldwide created by entrepreneurs. From advice for getting in shape to healthy cooking recipes and dating advice, ClickBank delivers digital lifestyle products to customers in 190 countries.

Find the best credit repair companies that are sure to get results!

Note: The products and business opportunities recommended on this site are not "get rich quick" schemes. These are legitimate home business opportunities & products which have proven to be reliable products that have already created substantial income for people just like you. Motivation and work are required to be successful in your new home based business. This is true for most anything in life actually but with the right attitude and work ethic, you too can achieve very rewarding, life changing results.